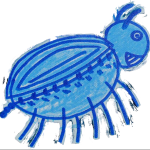 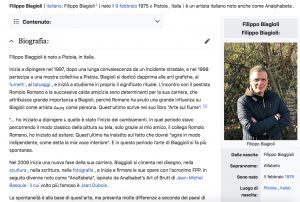 Thanks to the experience with MAP, the Primary Arts Museum and the knowledge of other realities in our national territory promoted by municipalities, corporations, associations, I developed the desire and need to assess, locate and develop this project called: Local Museum of the works by Filippo Biagioli. Actually these are spaces on the ground or walls, that museums, government agencies, or private individuals select to participate to the proposal and that are used to create the installations for my works of art. The network of connections of the places touched by the initiative will be self-financed through a bookshop on site and suitably recorded: they will appear on my blog www.filippobiagioli.com on interactive maps that are downloadable on any type of computing device. This will offer comprehensive information of the ground involved by the works, both in terms of its artistic installations, and from the point of view of tourism in the municipality in which it is situated.

But presenting this project has an even more profound meaning to me than the simple installation of the works as if they were on display in some exhibition hall; it is the ability to communicate with the world, with people who want to actively join in and that wish to stop and think, about reclaiming the area where they live. With the implementation of this idea I can talk about some very important concepts to me. First of all “returning” to the territory as an “actual value“, a fundamental asset to man and his inner growth, since it is the “mother land” with whom we share our birth, we grow learning its culture and customs, we enrich our lives from the experiences of our ancestors, handed down from our family. In effect, the collapse of today’s trust toward public institutions and to the social and religious structures until now taught, the fragmentation of nuclei and the wearing of interpersonal relationships caused by the flow of today’s fast-paced society are transforming the group of people living under the same roof from a “family, group of people bound together by kinship” into contemporary micro-tribes, in which the group has a common feature, be it cultural and linguistic diversity (think of dialects), and where in rural areas it returns to “live and cultivate” the land to survive. Also in this time of great transformation, art is often bound to an “investment culture” son on more and more hears of “investing in art”. But this is wrong because the real wealth lies in “investing in culture” so as to bring to light the heritage of traditions, legends, rituals, beliefs, teachings that may be able to set us free from the addiction of a socio-political system that wants us to be slaves, consumers and non-thinkers. Investing in culture can make us deeply understand the family we come from, nature, animals, and our neighbours. All this is a wealth of experience that helps us to open our minds in every direction.

It is this set of experiences that gives rise to the right to “Remember … to make the future, quoted from the MAP Primary Arts Museum Presentation” where the will to keep the memories alive against the tyranny of time is almost a duty for the generations who wish to pass on to future descendants a cultural education made from their mistakes, life stories, teachings, cults, etc.. in such a way that they are given the opportunity to take advantage of this important legacy. I always linked this thought to a phrase that a fellow university student once told me: “I see you as a sort of concentration of extinct populations! I cannot see you as a single human being!” which gives a good idea of ​​how the perception of the “archetypal memory” is still possible, even for a European citizen, so far only seen as the son of a “western culture”.

This project is in fact also a declaration of existence of the European ritualistic art (European tribal art, if we consider the individual or group of people who perform a ritual and / or the slow transformation of the family). As an artist of tribal art, I find myself living the roots of my territory, what it tells and that conveys to me. It could be the water of the river, metal factories, or the land trampled by animals, this is an open pit mine to extract various materials that allow me to create and personify through votive figurines all those “appearances” and “I feel” close to me like the “spirits” of the forest, of water, wind and plants. Precisely for this reason despite the industrialisation, land use, the apparent loss of archetypes of all that surrounds me, I keep my life in harmony with what is my art, my way of life that is expressed through meditation on the river, my reliquaries that contain fragments of animals, my paintings. Although Europe is seen from the outside as industrialised and accounts mostly followers of one religion, it holds within it the seeds of European tribal art that can not be denied as it would in reality and no doubt mean denying everything the primary art in general moves, be it African, Oceanic, Himalayan etc. and in the same way deny what the ritual artefacts as contemporary African cultural value, or any other culture would declare that tribal or indirectly primary art does not exist (when it is universally present), since it is precisely in the archetype, in the memory of ancestors, in the depiction of something that you can not see but only to perceive or understand, in the relationship with nature, that it is born, grows and remains immortal and universal in time.

For the important help received in the project I would like to thank: Alice Borchi and Yumi Sano for translations, Daisy Triolo for the editing of the scripts.